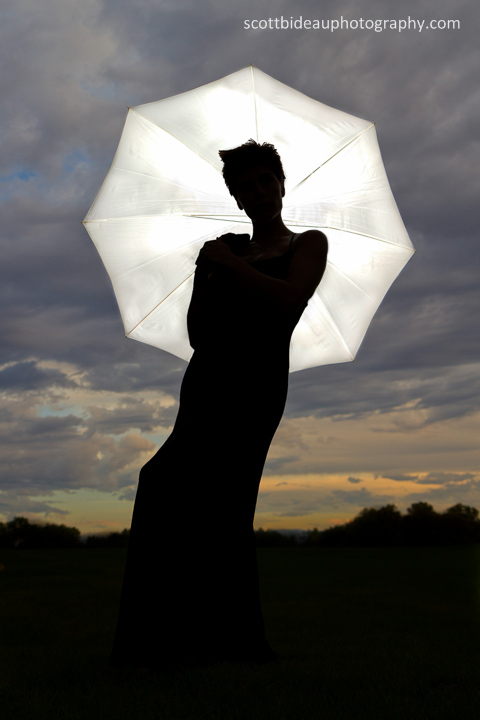 Creative lighting is one of my favorite aspects of portrait photography. Here’s how careful control of ambient light combined with a single Speedlite and $25 wireless triggers created this unique silhouette image…

For this photo, I wanted to silhouette the model and foreground against a sunset sky and lighting umbrella.
Controlling Ambient Light
The first step was determining the amount of ambient light to include. I do this before even turning on the flash, and there are two key points to remember.
First, aperture and ISO will affect both your ambient light and the flash.
Second, because your flash is instantaneous, only the ambient light is impacted by shutter speed. This means you can allow more or less ambient light by increasing or decreasing your shutter speed while having no impact on your flash. There is an explanation of this principal on strobist.com that I won’t repeat in detail. 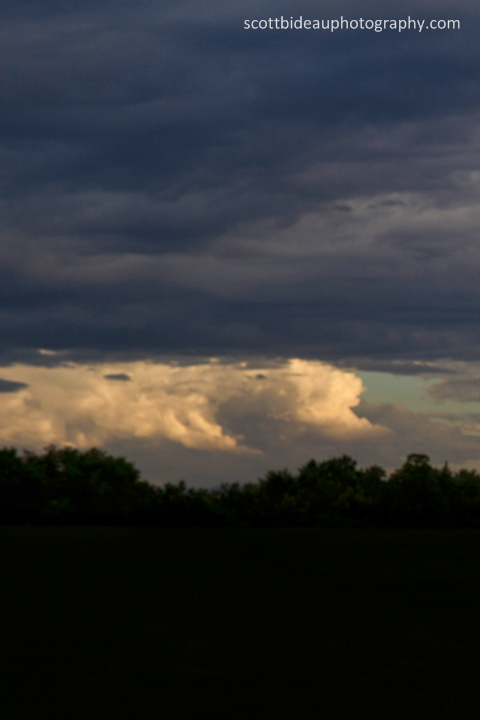 I went to 1/250th of a second, my camera’s fastest flash sync speed, to eliminate as much ambient light as I could.  As you can see in the test shot above (without the model or flashed umbrella added in yet), this shutter speed cut the ambient light on the grass and trees while producing the desired exposure on the sky. I then selected an f/4 aperture to make things easier on my flash.

Off Camera Flash and Wireless Triggers

Next it was time to light up the umbrella.

I attached a Canon 580EX II Speedlite to the lighting umbrella pole using gaffer’s tape (a photographer’s best friend). A Yongnuo RF-602C wireless trigger set was connected to my camera’s hot shoe for triggering and to the Speedlight via PC sync cable as a receiver. The Yongnuo receiver can also be attached directly to a Canon Speedlite hot shoe mount if desired.

The first image had all sorts of light from the flash spilling onto my model which ruined the silhouette effect. 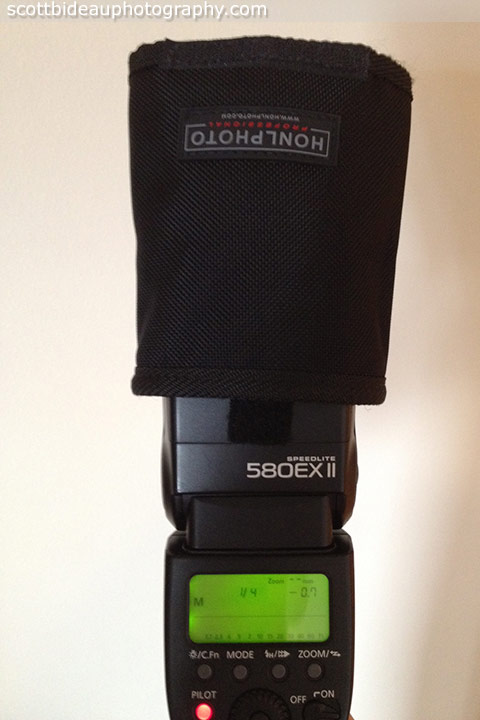 I flagged the Speedlite with a Honl Snoot to direct all the flash upwards. This is a great little device that conveniently connects to a Speedlight using the Honl Speed Strap.
Balancing Flash
Now it was time to blow out the umbrella and create the strong contrast needed for a silhouette effect. No camera exposure changes were required. I stayed in manual mode at f/4, ISO 100, and 1/250th of a second, the correct exposure for my desired background. Only an adjustment to the flash power was needed. Thanks to a low f/4 aperture, I only required about 1/3 power from the Speedlite to produce the image below:

I ran into this little guy last week. He had recen

I nearly lost my voice yelling words of encouragem

My favorite moment from today’s @arizonacyclinga

Got tired of the kids having exclusive rights to f

What a fun and exhausting (in a good way) time it

Had to cancel team practice due to lightning but s

Finally back to early morning ride routines. It fe

Rain delays are worth it when the resulting dirt i

Perfect end to a Colorado camping trip with 20+ cu

I asked the middle school bike team students to sh

Lots of loaner bikes make for loads of fun at the

No hogs, but in just ninety minutes of throwing a

In just a quick 15 minute stop, I hooked into seve

Ran into a large number of small largemouth bass h

Just a few days before Memorial Day, I had the hon

The 2022 U12 Misfits fought hard in the tournament

Huge thanks to @jaekauf! You made my daughter’s

Bike coaches learning how to be better coaches for

“Look for me at the Whiskey Off-Road”, I told

I was fortunate enough to play in the forest for a

@paul_fabian sending it through one of my favorite

All Contents Copyright © 2021 Scott Bideau and GetOutThereAndExplore.com. All Rights Reserved.

Site contents are provided for entertainment purposes only and should not be construed as professional advice. Written permission is required for any use and/or duplication of site contents except for the utilization of brief excerpts when linking to or discussing an article, provided that credit is given to Scott Bideau, which must include linking to the original content.